I enjoy collecting Kyusu  to brew all types of tea from all over the world.  A tea friend once told me that Japanese teapots are only good  for brewing Japanese tea but I explained to him that teapot is just a vessel for brewing tea.  Just like car, even if it is made in Japan, they can be driven anywhere in the world.

Likewise for tea, which is essentially camelia sinesis.   Tea and teapot should also be universally accepted without any geographical boundaries.  They should be assessed and appreciated based on their intrisic values, wherever they are from. Essentially, it is all about how we use the teapot to brew tea, how we control the brew and what we want out of the brew to suit our palate for our own enjoyment and appreciation.

So, use any teapot or vessel  to brew any tea without any restriction. But like everything else in life, we have to go through the experience of constant experiments, to brew any teas with any teapots in order to understand their shortcomings and potentials.

With experience, knowledge will then be transformed into understanding. 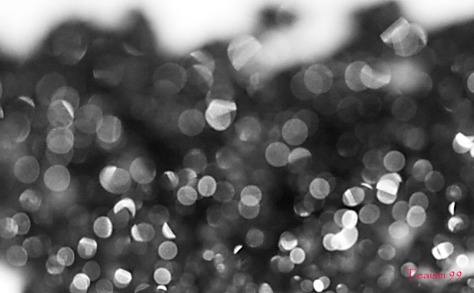 Ancient Dragon Pearl Tea 陳年龍珠茶 is a very rare and exotic “tea”. It is actually the excrement from a type of insect larva found in Yunnan, China.  The larvas feed on the leaf of a local native plant. Bamboo tray is placed below the leaf to collect the larvas’ excrement. Scientific analysis shows that the excrement contains crude protein, crude fat, tannins, vitamins and nearly 20 types of amino acids. The excrement is then processed by pan roasting with tea in the ratio of 5:1:1 (Excrement:Tea:Honey) to absorb the flavour of the tea.

Sounds bizzare? But really, it a very highly prized, rare and exotic traditional tea that are sought after by many tea connoisseurs.

Today, I will brew this exotic tea to savor its taste. This tea is processed in the 1950s. The shape of the tea looks like mustard seeds but half the size. After refreshing the tea, it smells like a good aged tea with musky and minty aroma. The color of the brew is very dark brown. The taste is very exotic and pleasant with layers of complexity of musk and dried fruits. It has a pronounce minty and refreshing aftertaste with the profile of a good aged tea.

Overall, it is a very pleasant and unique experience drinking this tea. Definitely this is the type of tea that I will appreciate more and more over time. It reminds me of my experience with truffles when I first tried them and now I am a great fan of truffles. Or perhaps even, the caviar of tea. 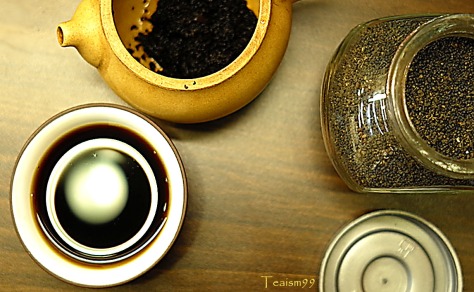 But beware! This is a very rare traditional tea processed in a very remote area and the authentic ones could hardly be found in the market nowadays. Although this tea may sounds bizzare, it is definitely a rare and exotic tea that is part of the tea history. 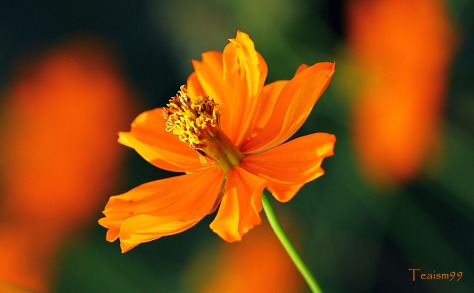 Wishing all my friends and viewers a very Happy Valentine’s Day!

Thank you for your visits and have a great day!

Icon always comes with interesting nickname. Likewise, the iconic  Puer tea nicknamed Ta Kou Zhong , 大口中, which is directly translated as Big Mouth Centre.  It refers to the character of Zhong 中 in the wrapper of Seven-sons Puer tea cake made in 1970s to 80s and also some tea cakes wrapper of the early 90s made by various producers.

The stylized rectangle character of Kou 口 in the character of Zhong 中 is bigger than normal, and therefore Ta 大  is used to describe the unusually bigger size of  Kou 口 in the word Zhong 中.   That is how it gets its nickname from.

This iconic Puer tea is said to be of higher quality and some described it as the tea that possess the dynamism and vitality of a galloping horse.  Wow!

Today, I will brew this (1970s 大口中) tea just to find out the truth behind its description.

This piece of tea that I kept  is very well stored. The tea leaves are clean, reddish dark maroon and smell fresh without any undesirable odour.   After  removing some tea leaves carefully, I refreshed the dry tea leaves and let it settle for a while before brewing it.  The tea is really wonderful and last many brews. The colour of the brew is translucent golden amber. It is really very beautiful.

This tea has a pronounced  enticing taste of lotus and bamboo leaves aroma and sweetness with tranquil complexity.  It also has hints of similarities to the 1950s Liu An tea that I had tried.  The overall impression is quite far from any galloping horse dynamism or vitality as described by others, but close to something that we would  describe as perfect. Voilà!

Now, I just like to enjoy this tea without getting distracted by writing too much technicalities…

Patiently, respectfully and attentively, as I sip this tea, just like when we are in the company of an honoured veteran.

What is The One ultimate and the most important rule of using Yixing teapot?

~  Sterilize the teapot with boiling water before use

~  At the end of the tea session, immediately remove all the tea leaves and flush with boiling water.

~ Ensure that the pot is totally dry before storing

~  NEVER  STEEP THE TEA LEAVES IN THE POT OVERNIGHT

~  Sun the pot. The UV will sterilized the pot further.